Paolo Roberto Pianezza and Francesca Alinovi make up the Lovesick Duo, which has become a hit on the internet in recent years and has launched their musical careers with more than 120 performances annually. Their YouTube channel has clocked up over seven million video views. Their music can be defined as Americana based on US music of the 1940s and 50s, rock'n'roll, western swing and country, but with the addition of well-known Italian standards, which make this high-energy’s duo live performances a real treat. They have released several albums, perform regularly throughout Europe and the US, and appeared as actor-musicians in the film Lamborghini and the series Speravo di morì prima (Sky TV). 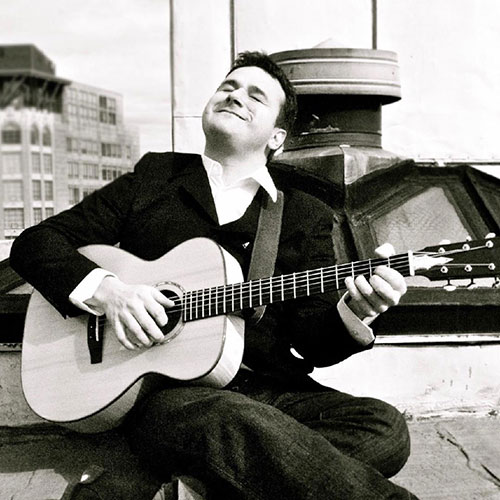 Sašo Zver is a Slovenian musician, who currently lives and works in Murska Sobota, where he runs the successful Global Guitar Lessons online music school. He has played, performed and shared the stage with some of the biggest names of the world music scene, such as Tommy Emmanuel, Woody Mann, Keb' Mo, Jack Pearson, Vince Gill, Tom Bresh, Laurence Juber, Stanley Jordan, Eric Bibb, and others. In addition to concerts in Europe, Sašo Zver regularly performs in the United States, where he also appears every year at the famous Chet Atkins Appreciation Society in Nashville. In his thirty-year career, Sašo has become known as a master of the fingerpicking playing style, although his musical horizons are much wider: his performances include songs by the Beatles, music inspired by African motifs, Celtic and Roma music, all the way to his own arrangements of Slovenian traditional compositions.

Edi Maružin is the frontman of Gustafi, one of the longest-lived and most popular Croatian groups, and this project is dedicated to his greatest musical love – the blues. The result is one of the most interesting creative phenomena on the Croatian music scene. Their first album Sumpor ("Sulphur") has already managed to achieve what many global stars can only strive towards – to create original, interesting and innovative blues-based music whose wide-ranging details seize the listener's attention, from the traditional Istrian canto to trance, neo blues, Siberian steppe songs (!), and more. Edi East Trance Blues will represent Croatia at the world's largest blues competition, the International Blues Challenge in Memphis in 2022.

Filippo Consentino is one of the most respected Italian guitarists, considered one of the rising stars of the European jazz scene, with roots in classical, Latin and contemporary music. He is also known as one of the most important baritone guitar players. In addition to making his own albums, he is also the producer and arranger of numerous other – mostly Italian – artists’ releases, in various genres. He graduated from the Faculty of Philosophy and the Conservatorio di musica G.B. Martini in Bologna. He has performed at some of the world’s most prestigious jazz festivals from Europe and the US to Hong Kong, China, and elsewhere.

In recent years, Rijeka musician Alen Brentini has been a permanent member of the band of the biggest Austrian-German star, Andreas Gabalier, with whom he frequently performs at sold-out concerts in the biggest European stadiums and arenas. In Croatia, he has worked with numerous musicians, including famous names such as Dado Topić, or Aki Rahimovski from Parni Valjak, with whom he played an Australian tour and recorded an album. In his own work, which can also be heard on several released albums, he focuses on hard-rock-metal music including occasional acoustic diversions. In addition to his Power Trio, he often performs live with other prominent European and international musicians.

Guitar maker Stanislav Kamenar makes instruments based on the legacy of key builders in the history of classical guitar, Antonio De Torres and Jose Ramirez.

Robert Hent is a maker of unique electric guitars distinguished by top performance and construction.

For more information and registration, contact us on email: dhalilic@yahoo.com.

For more information and registration, contact us on email: dhalilic@yahoo.com.